The Church of Ireland is both protestant and catholic. This might sound like a contradiction, but it makes sense if we understand that when the Church of England broke away from Rome, it sought to become a “middle way” betwe 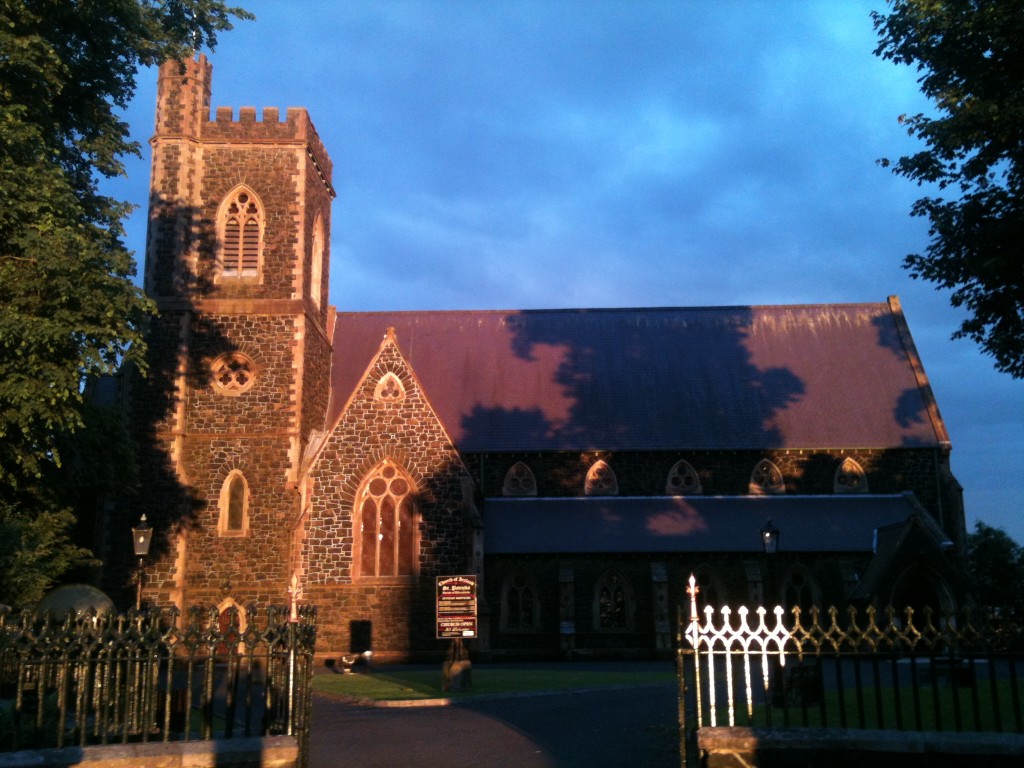 en Roman Catholicism on one hand and more extreme forms of Protestantism on the other. So we are catholic in the sense that we continue the faith and practices of the early Church as taught by the Apostles, and brought to this island by St Patrick, and we are protestant in the sense that we reject any innovations or theological beliefs that cannot be proven by Scripture.

During the English Reformation, the monarch became the Supreme Governor of the Church of England, and subsequently also of Ireland. Consequently, for many years the Church was subject to the will of the British Parliament. However, in 1871 when the Church of Ireland ceased being the nationally established church in Ireland (referred to as “the Disestablishment“), the authority to govern the Church was taken from Parliament and given to our General Synod. This is a large body which meets once a year, consisting of the Bishops and representatives of the clergy and lay people from across the island. This body alone is permitted to make changes to the way our Church is managed, and the way in which we worship.

Although generally governed as a single unit, there are three church buildings and congregations in our parish, each of which has its own identity, and slight variations in customs and practices. Our parish of Kilconriola and Ballyclug – which is a historic union of two separate ancient parishes – forms part of a grouping of local parishes known as the Rural Deanery of Ballymena. This in turn forms part of the Diocese of Connor, which is overseen by our Bishop. Our diocese is one of twelve that cover the entire island of Ireland, overseen by the Archbishop of Armagh. The Church of Ireland is a member of the Anglican Communion, which is a worldwide organisation consisting of churches that were founded by missionaries and emigrants from the Church of England, Church of Ireland and the Episcopalian Church of Scotland. All across this planet, you will find congregations whose buildings and services are visibly similar to our own. Each of these member Churches recognises the Archbishop of Canterbury as the head of the Communion, although he has no power outside the Church of England.

The governance of each parish is quite complicated, but put simply: on one hand the Select Vestry is responsible for our buildings, finance, staff and resources, whilst on the other hand the Rector is responsible for everything else. The Select Vestry consists of the clergy and representatives of the lay people: in Ballymena this includes six Churchwardens (two from each of the three churches), two Glebewardens, an Honorary Secretary, an Honorary Treasurer, and ten others. Of these lay members, four are appointed by the Rector and the remaining sixteen are elected at the annual general meeting of the parish, known as the Easter Vestry. The Select Vestry has a number of subcommittees: Finance Committee, Fabric Committee, Human Resources Committee, etc. The basic purpose of the Select Vestry is to ensure that there are adequate resources available to carry out the ministry of the Church. This ministry is, however, determined by the Rector alone, although in practice he gives leadership to a number of committees or groups that develop and oversee this work: Ministry Team, Young Person’s Steering Group, Mission Team, Communications Committee, Prayer Ministry Team, Pastoral Care Team, etc.

The rules of the Church of Ireland place a lot of responsibilities upon the Rector, as in addition to leading ministry, he is also the chairman of the Select Vestry. In order to assist and advise him in his work, he appoints two other ministers. These are often recently ordained clergy, who remain in the parish for just a few years. Technically speaking, the Rector is the Curate of the parish, and his two assistants are called Curates Assistant, but in practice they are simply referred to as Curates. In order to prepare the Curates to become first-time Rectors elsewhere, it is the custom in Ballymena for the senior of the two to become Curate-in-Charge at St Columba’s. Whilst still being greatly involved in the work of the whole parish, this extra responsibility for one Church enables them to develop their leadership and pastoral skills yet have the support and encouragement of a senior clergyman – the Rector.

Although our rules entrust Christian ministry to the clergy, we acknowledge that God assigns particular gifts and ministries within His Church to all Christian people. We therefore seek to discern the God-given role of each person within the parish, and to help them to develop and carry out their ministry.

The vast majority of our services in Ballymena follow the format found with the Book of Common Prayer. The original Book of Common Prayer (BCP) was written in 1549 by Thomas Cranmer, who – although including some of his own material – compiled the prayers from ancient forms of Christian worship used by monks. Since 1549 the BCP (as used by the Church of Ireland) has been updated seven times, most recently in 2004, in order to reflect changes in language, or to better express our theology. The current BCP allows for both traditional-language services and modern-language services, as well as a certain amount of freedom to experiment with contemporary expressions of worship.

It is very easy to become wrapped up in dealing with the administration, activities and worship of the Church, and forget that our mission is primarily to promote Jesus’ victory on the Cross, and thereby win souls for Christ. We must therefore seek new ways of reaching out into the world (both local and abroad) in order to bring the Good News to people who desperately need to hear and respond to it.