The original parish church of Kilconriola in the townland of the same name was situated about two miles north of Ballymena. It was in ruins from before the Reformation but these ruins are clearly visible in the graveyard where burials still take place. In the changes that took place after the Reformation it does not seem that the parish enjoyed the regular celebration of worship. A parish church was started in 1707 and this was finally consecrated in 1721. This building, clearly visible from St Patrick’s, is in Church Street but only the tower remains surrounded by a graveyard – one of the few remaining towers of Ballymena.

With the growth of the population of the town during the first part of the nineteenth century this church proved too small and the plan was to replace it with a church seating 800. The foundation stone was laid on St Patrick’s Day 1853 and consecrated in 1855. The project was completed largely due to the enthusiasm and dedication of the then rector William Reeves. As well as raising much of the necessary money he also made a substantial gift himself. The Adair family of Ballymena Castle gave the ground for the present site and also contributed greatly to the overall cost of £5,000 – the parishioners also responding generously.

William Reeves himself gives this description of the church with which he is so intimately associated:

‘The style of the building is the Transition from the Early English and, while paying due regard to architectural propriety, it has been more desired to obtain the beauty of proportion than of decoration; consequently many of the details are exceedingly plain, as it would have defeated the main object to obtain ornament at the expense of accommodation. The walls are built of the dark blue basalt which abounds in the district, with which the pure Scotch sandstone of the windows and quoins forms a most pleasing contrast. The nave measures 94 feet by 27, in the clear; and the chancel 40 by 20. The aisles are, each, 63 feet by 12; and the transepts 19 feet by 15. Owing to the peculiar nature of the site, the tower occupies the angle of the north transept and chancel, by which its ground floor affords a vestry fifteen feet square, and an organ-chamber, overhead, communicating with the church by two open arches. Its height is to be 95 feet. The clerestory is lit by ten windows, and is supported by as many octagonal columns. The roof is open, and is sixty feet high at the ridge. The entrances are at the north-west and south-west angles, the former being the principal one, and furnished with a graceful porch’.

Unfortunately the first funeral in this new church was to be that of Reeves’ own wife – she died giving birth to their tenth child. You will find a window dedicated to her in the north aisle. William Reeves was also renowned for antiquarian and archaeological research and for some years was also headmaster of the Diocesan School in Ballymena – the forerunner of the present Ballymena Academy. A plaque can be seen on the outside wall of the tower commemorating his work.

The church was totally destroyed by a fire on 13th December 1879 but the same contractor rebuilt it along the old lines in fifteen months at a cost of £9,000. The same bishop who had consecrated the original building re opened it. The building has remained much the same since that time though there have been extensive renovations to maintain the quality of the structure. There have of course been additions in the form of church bells, stained glass windows and other items of furniture.

Most visitors make mention of the beautiful stained glass windows and the variety of them. Of particular note are the great west and east windows. Both depict trees. The west window depicts the tree of the knowledge of good and evil from the story of the fall in the book of Genesis at the beginning of the Old Testament. Then at the front of the church we move to the good news and the words of Jesus as reported by St John – “I am the true vine. . . . Ye are the branches.”

In the north aisle the second window vividly portrays the challenge of our Lord as found in the book of Revelation – “Behold I stand at the door and knock: if any man hear my voice, and open the door, I will come in to him, and will sup with him and he with me.” (Rev. 3v20). There is the great Ascension window in the south transept and in the south aisle a window depicts the parables of the Sower and the Good Samaritan. All of the windows are worth closer inspection.

In the chancel area of the church are to be found the choir stalls andthe organ. St Patrick’s has always sought to maintain a high standard of music in worship. No provisionfor an organ was made in the original building. The two manual hand pumped instrument installed in 1869 was destroyed in the fire of 1879. Conagher’s of Huddersfield built the new organ which was to be later upgraded in 1908. A major repair and restoration was carried out in 1981 by the firm of Wells Kennedy at a cost of £48,000. The present organ is regarded as one of the finest instruments of its kind in Northern Ireland. This three manual organ has a total of 41 speaking stops with couplers. It is indeed uplifting to sit in church and to hear the beautiful music it provides through the skills of our organists. 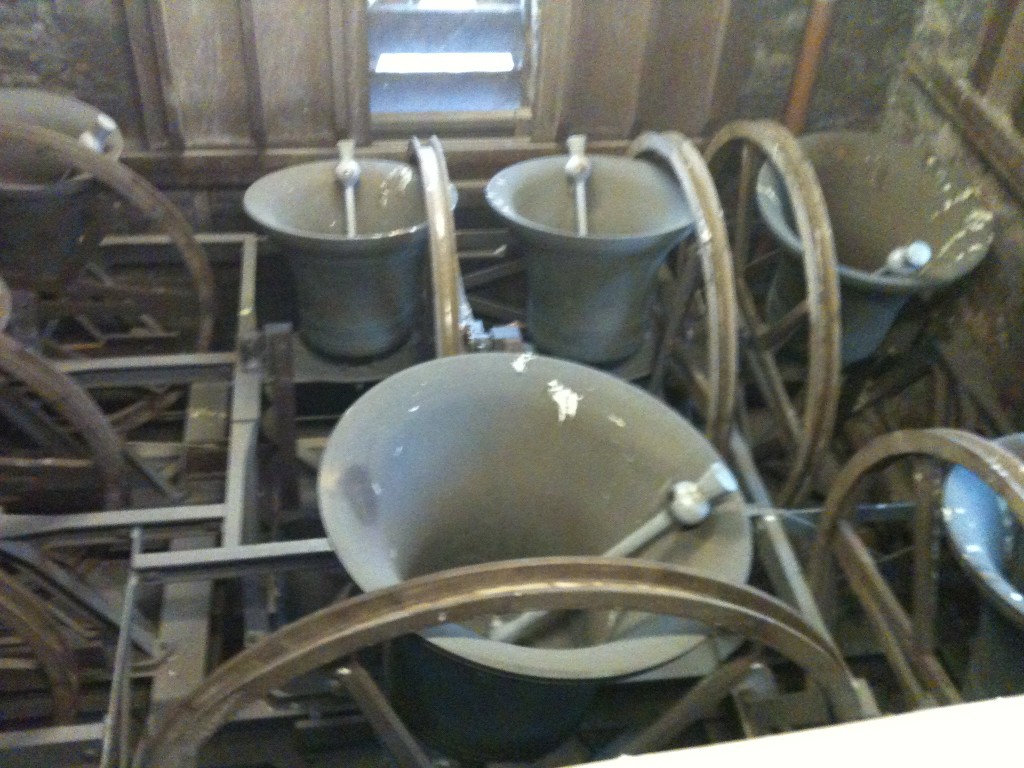 Speaking of bells, mention must be made of two ancient bells connected with the parish. The parish includes the church of St Patrick’s Ballyclug. The name Ballyclug means ‘the town of the bell’. The ‘Bell of Ballyclug’ is to found in Belfast Museum and is one of the very old square shaped iron bells usually associated with St Patrick and used to call the faithful to worship. Also in the museum is the ‘Bell of Ballymena’, one of the earliest known bronze bells probably dating back to the very early Christian centuries. This was found near the ruins of the old church at Kilconriola.

The 17th century bell from the former parish church in Church Street now can be seen in a timber belfry in the grounds of St Patrick’s. The first bell in the tower of St Patrick’s was from 1866 and weighed 12 cwts. In 1895 a new ring of 8 bells replaced this single bell and it was sold to Lambeg Parish Lisburn where it is still in use.

The new bells were installed as a memorial to Dean Murray, former rector of the parish, and it is reported that the first peal of these bells was listened to by crowds of people who thronged the approaches to the sacred edifice.

For nearly a century these bells rang out over the town and could be heard distinctly from far afield. By the early 1980’s it became clear that restoration work was required on both bells and tower. This resulted in 1987 in the recasting of the original 8 bells to make a lighter ring of 12 bells. The original massive English Oak framework was replaced by cast iron frames on galvanised steel beams carried by a reinforced concrete ring beam. The ringing room, half way up the tower, also took on a new look through a complete renovation. There are only 3 churches in Ireland which have a ring of 12 bells so we in St Patrick’s are privileged to be one of them. We are also fortunate in having had over the years a dedicated band of bell ringers and still today the bells are rung for each Sunday service and for other occasions.

In the church going up the left side aisle you will notice a vividly coloured stained glass window of St Patrick. It depicts him during his time of slavery minding sheep on the mountain of Slemish. This mountain is only ten miles from Ballymena and can be clearly seen from points around the town. Thus St Patrick has close associations with this whole area.